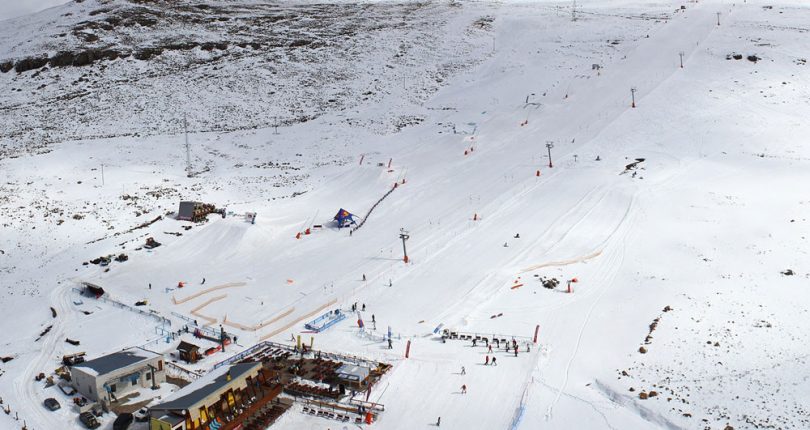 Located at 3,222 metres of altitude, The Ski Restaurant overlooks the slopes of Afriski, Lesotho’s only ski resort, and actually only one of the two on sub-Saharan Africa. The restaurant is so high up that the waiter seemed to be out of breath after making his way to get the orders.

We left from Johannesburg early on a July morning and after crossing the border at Caledonspoort we were welcomed by winding roads and some hard core vertical drops. We spotted the resort from a distance, in the middle of nowhere. A little white strip amid the mountains, it almost looked like a line of Tipp-Ex on a painting.

Once we arrived on the spot, I realised that “Resort” was not really the right word for it. The place was in fact quite small with only one ski run and one main T-bar lift servicing it. There was not much else around, in fact only a restaurant at the bottom of the slope, one après –ski bar and one shop.

In 2002, Wessel Bosman a South African hurdler established Afriski. He decided to open the resort after his trip to Japan for the winter Olympics where he came across snow for the first time and gave a go at skiing. While he was there, he noticed that a few South Africans had travelled all the way to Nagano to catch some snow. That made him see a great business opportunity on the Lesotho’s mountains.

Approximately 11,000 people visit Afriski every season. They are mainly South Africans that want to learn ski for the first time and many come from Johannesbourg, being only a 5 hour derive from the Resort.

The main T-bar services a 1,000-metre long run and there are three smaller beginner lifts. After taking are rental gear, we made our way to the T-bar which, in compare to the facilities we are used to in the Alps, was incredibly slow. However, the view from the top was breath taking.

Afriski uses a mix of natural and manufactured snow, which was surprisingly good to ski on.

The après-ski took full swing by early afternoon with music and ski instructors putting up a sort of entertainment.

The resort’s manager told us that the business has reached a point where they could expand and there might be possibility of adding another slope and lift. They are working on marketing it as a year round resort. Now it runs from the beginning of June to the end of August, but in the summer months, it offers a network of scenic hiking trails.

The 5 Healthiest Cities To Live In Africa

Malnutrition and abject poverty are two things associated with the African continent. But if you...

People have always viewed restaurants as a place of having breakfast, lunch or dinner or a location...

One thought on “Postcard from Lesotho’s ski Resort Afriski”